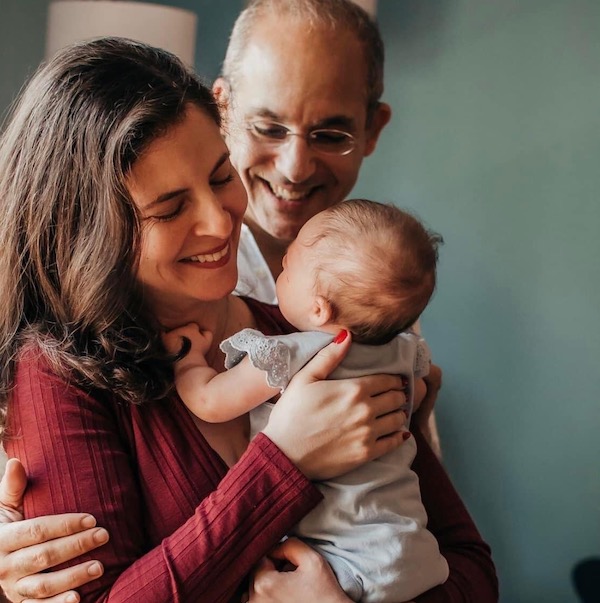 From Loss to Hope to Birth: My Story & My JFF Tribe

Roee and I experienced two heartbreaking pregnancy losses in less than a year due to polyploidy, a lethal chromosomal abnormality. In May 2020, we thought we were going to be part of the wave of pandemic babies when we found out I was pregnant for the first time ever. Unfortunately, it resulted in a miscarriage, and an analysis revealed tetraploidy as the cause. Instead of receiving 23 chromosomes from one parent and 23 from the other, our male fetus had two duplicate sets for a total of 92. This was a painful loss, but the pathologist assured that it was quite rare and extremely unlikely to recur. We were told it was likely a sporadic chromosomal error that, unlike so many others, is not linked to advanced maternal age.

Six months after losing our first pregnancy, we found out I was pregnant again in December 2020. I sailed through the first trimester, prenatal testing, the nuchal translucency test, and the quad screening. At 12 weeks we found out we were having a girl, and it took us less than a week to name our daughter Eliana. My appointments and genetic tests all indicated a healthy, developing pregnancy with no concerns until the 20-week anatomy ultrasound.

Our hearts sank when my OB looked up and said, “I don’t like this measurement.” It turns out she was measuring almost a month behind. The next day we were sent to a maternal fetal medicine specialist who confirmed multiple fetal anomalies and recommended an amniocentesis, which we agreed to. That evening, as a result of the amnio, my water broke, which happens to only 1 in a 1,000. We were absolutely devastated. When we received the results the following day after I had emergency surgery, we learned that she had triploidy, a complete extra set of chromosomes for a total of 69. Even if my water had not broken, she would not have survived beyond a few hours or days if she had managed to continue to term because her condition was incompatible with life.

For most, a triploidy pregnancy is not a recurring event, and a tetrapoloidy pregnancy is so rare that it’s extremely difficult to find out how often it occurs. Following recurrent polyploidy, my doctor recommended IVF with genetic testing.

In the weeks after our second loss, I was swimming in grief and barely able to function. Roee reached out to his friend, Cantor Deborah Hartman at the Temple. Though I didn’t know this at the time, she called the Jewish Fertility Foundation for therapist recommendations and was given the name of Dr. Lauren Berman. In my first appointment with her, I mentioned how I couldn’t even consider IVF because of the cost, and that was when she told me about JFF. I didn’t even think I would qualify because I didn’t have traditional infertility, just difficulty with having a pregnancy continue to live birth. In probably the darkest hours of my life, learning about JFF and its partnership with JIFLA gave me hope for a different kind of future that was still filled with uncertainty, but made the greatest barrier to pursuing IVF possible.

As we ventured down the IVF path, the support groups were a lifeline for me. I made a strong connection with another regular attendee because we had our egg retrievals days apart. She would preview for me what was ahead.

Over several months, six of us started to form a text group outside of our support group sessions. Some of us graduated into the Pregnant After IVF group, but we all stayed in touch and got together to go hiking and celebrate Chanukah. We sent each other progesterone injection tutorial videos. We remembered each other’s appointments, checked in regularly, and cried when any of us received bad news of another failed transfer or a well-meaning friend who just didn’t get it. They were equally, if not more, excited than we were when my first retrieval resulted in two chromosomally normal embryos. We were fortunate in that my first embryo transfer resulted in a pregnancy and ultimately the birth of our daughter, Karine, in July 2022. My JFF friends were at the top of my list of text threads when I was in labor.

JFF has meant everything to my family and to my wider circle of JFF friends, who have become a lot like family. That’s why I made annual fund calls the day after my transfer and continue to volunteer as a fertility buddy. Thank you, JFF, for making some of the most profound dreams come true and for offering hope and love and light – along with phenomenal financial and emotional support resources – to get us here.

Happy Monday! What are YOUR intentions this week

We are so grateful to our JFF community of support